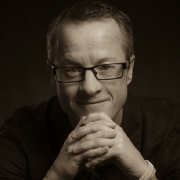 I grew up in rural Devon during the introduction of Section 28 and remember the anti-gay tabloid headlines very well. I realised I was gay when I was 11 and was bullied throughout my time at school for being different. Unsurprisingly, I didn’t feel able to ‘come out’ until I’d escaped to university. I was very fortunate my family were supportive of me at the time and have always continued to be so.

I followed in my father’s footsteps and joined the police in 1998 – it was a way of helping others and enjoying a varied, challenging career. I ended up joining West Midlands Police because it was one of the few forces at the time that included sexual orientation in its equal opportunity statement. At the time I identified as a gay woman and I wanted to know the force would have my back if I was bullied again for being me.

My self-awareness has developed since I joined the police and I now identify as trans, non-binary and describe my sexuality as pansexual. I started my transition almost 15 years ago, back in 2007, at the age of 35. I started with private top surgery to deal with my greatest source of gender dysphoria. I told myself I was unsure about starting cross-sex hormones because it would limit my opportunities to compete in sport. However, I very quickly realised I wasn’t being honest with myself and I definitely wanted to start hormones and assess if they would help my wellbeing going forward. Getting access to them proved to be very difficult because I made no secret of the fact I identified as non-binary. The local endocrinologist I saw said I didn’t fit the prescribing criteria and suggested I obtain some steroids from the gym where I trained – an interesting demonstration of his ‘duty of care’ to me! Also not the most sensible suggestion to someone he knew was a serving Police Officer, was he trying to jeopardise my career and my health… I then endured two years of travelling up to Sheffield Gender Identity Clinic every three months to have the same conversation over and over again. The lead clinician was cautious about providing hormones in case I changed my mind – despite the fact I was ecstatic with how much better I felt after the top surgery. However, one visit I struck lucky and saw a locum doctor who was prepared to write me a prescription and I’ve never looked back. Transitioning is by far the best thing I’ve ever done for myself. I think I’m extremely fortunate to transition when I did as my initial transition only took two years. The current waiting time for just a first appointment at a GIC is anywhere between 3 to 51/2 years, which is a very long time to be left in limbo.

I’m currently the trans lead for the National LGBT+ Police Network. I helped shape the 2012 PACE guidance on searching trans detainees according to their lived gender, as well as the recently revised guidance on searching by trans and non-binary colleagues. Progress has been much slower than I thought it would be, but a long period of austerity has meant the service’s priorities have been focused elsewhere. The Police Uplift Programme offers a great opportunity for the service to introduce ‘best practice’ recruiting processes across all 43 forces of England & Wales. Historically, the service has expected each force to deliver LGBT+ equality and inclusion through using third party, equality frameworks such as Stonewall’s Workplace Equality Index.  I think the next step is to coordinate improvements by creating a nationally owned LGBT+ action plan, as exists for Race and Gender for example. Through collaborating with partners and the wider LGBT+ community we can transparently demonstrate and communicate progress, which will help build trust and confidence and deliver improved LGBT+ inclusion in the service we offer the public and career we offer colleagues.

In my day job I’m currently a Force Intelligence Officer, a role I’ve thoroughly enjoyed for over 15 years. I describe my job as supporting my colleagues to work smarter to deliver proactive policing. Every day offers a new challenge, needing me to be creative and a problem solver. I’ve worked with teams tackling organised crime groups involved in drug supply and the use of firearms, high risk sex offenders, as well as assisting in those investigating live kidnaps, as well as domestic and child murders. I’m currently part of our Serious & Organised Crime Unit tackling violent gangs who exploit others, for instance through county lines drug dealing. I count myself as being extremely fortunate in being able to truly be the very best I can be, in a job I absolutely love!

My advice to any LGB&T+ individual living through what feels like a trans version of S.28 is don’t waste your time and energy on the haters. Focus on what you can control and enjoying your life – life is much more enjoyable if you do this! Connect with like-minded people, be that LGBT+ role models or anyone whose values and actions you admire. Help support each other in whatever your seeking to achieve. We’re all stronger together J