The National LGBT+ Police Network is the representative body for LGBT+ police officers in England, Wales, Northern Ireland and the Channel Isles.  It is governed by the National Coordinating Group (NCG), which is made up of regional representatives from across the UK.  We are proud to announce the launch of our new Intersectionality Working Group (IWG), which aims to improve representation within the NCG and to enhance the inclusion of Black, Asian, and Ethnic Minority LGBT+ people within the national and regional networks.  We will be working closely with other staff networks such as the National Black Police Association to achieve this.

Following recently held elections, the NCG is proud to announce the IWG Chair as Dionne Johnson of Staffordshire Police, and the Secretary as PC Laks Mann of the Metropolitan Police.

The Black Lives Matter (BLM) protests forced many of us within policing to take a hard look at ourselves and to ask, are we doing enough to support our Black, Asian, and Ethnic Minority communities and colleagues?  We in the NCG recognised that we had clear gaps in diverse representation and that we needed the voices of our Black, Asian, and Ethnic Minority LGBT+ colleagues to be around the table to ensure our decision making is more representative, fair and inclusive.  For me personally, it was incredibly important that we addressed these gaps and took steps to do more for our diverse LGBT+ community and beyond, as my own experience of discrimination within Northern Ireland society highlighted to me how important it is for people from marginalised groups to have their voices heard and to see meaningful, positive change.  I was asked by the NCG to get the IWG up and running so I engaged widely with LGBT+ colleagues with diverse characteristics from dozens of UK police services, to help shape what the role and function of the group would be.  We decided the main aim of the group would be ‘to amplify the voices and lived experiences of diverse groups affected by intersectionality, with a key focus on Black, Asian, and Ethnic Minority LGBT+ people within the National and Regional Networks’.  I am delighted that Dionne and Laks have been elected as Chair and Secretary of the group, as I know their experience and insights will help us drive the positive change and innovation in policing we need to see, for all our diverse communities.

The IWG Chair, Dionne Johnson had this to say,

I’m delighted to take up this post and I’m looking forward to working with others on the NCG to help improve the working lives of people affected by intersectionality, not just within UK policing but also in the wider community.  I’ve always had the desire and motivation to help others and help those who feel disempowered, as throughout my life I have experienced this. These experiences have made me resilient and give me a desire to ensure that others don’t have to suffer the real harm, discrimination and poor inclusion can cause.  Being Vice-President of the National Black Police Association and having a seat on the National LGBT+ Police Network gives me the unique opportunity to empower both our organisations to work together in order to push for the positive change our communities want to see in UK police services. 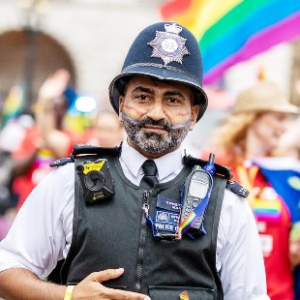 For me representation of Queer People of Colour (QPOC) in decision-making bodies such as the NCG is crucially important, as for too long our narratives have been overlooked, marginalised and silenced.  When everyone around the table comes from the same demographic or shares similar characteristics, ‘group-think’ can become a dominant culture.  This creates organisational blind spots and leads to mistakes that can easily be avoided by having more diverse representation.  We’ve seen those mistakes play out in how some UK police services responded to the BLM protests, which resulted in a further loss of community confidence.  By having diversity of thought and lived experiences around the table, including the damaging effects of intersectional racism and discrimination, organisations can work towards a culture of openness, honesty and authentic representation.  I’m looking forward to working with my colleagues on the NCG and IWG, whilst proudly representing my own diverse identity as a British South Asian Queer.

The terms of reference for the new group can be viewed here.

If you would like to be involved in the IWG have any questions for Dionne and Laks please contact Dionne.Johnson@staffordshire.pnn.police.uk & Lakhbir.Mann@met.pnn.police.uk