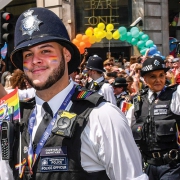 I am exhausted. Physically and mentally. I know the majority of the Met’s officers and our amazing police staff are too. Never before in history have we faced so many converging life-changing events and never have we found ourselves in situations where we may be asked to impose almost unbelievably restrictive rules on people. Since March, the Met and its people have been literally working flat out, perhaps harder than they ever have, in situations more dangerous than anyone of us could have anticipated. Even at the height of this unbelievable crisis, they did not falter, coming into work and donning their uniforms – heading out into the unknown to protect others. I am so proud of them.

I am also proud of the work our LGBT+ officers and staff have been doing too, throughout the Met. Emergency response cops, control room staff answering 999 calls, dog handlers, detectives, counter terrorism. I am fairly qualified to say that we have out and proud people almost everywhere in policing. Over the last few months, many of them helped organise and contribute to online Pride celebrations. Our new team of over 250 LGBT+ Advisers, introduced last year by our Network, with the support of the Commissioner, stepped forward to help.

Very senior people asked me how they could help demonstrate solidarity – there are only 12 frontline Chief Superintendents in the Met, delivering all the local policing to communities across all the 32 London boroughs and many of them arranged Pride flags to be flown across their police stations. They have also been setting up inclusion and diversity panels, inviting practitioners to advise them on how we can improve crime fighting, safety and work more effectively with the community – not just everyone but specifically those who might not have as loud a voice as others – LGBT+ people in particular.

LGBT+ officers have taken part in the first ever multi-disciplinary Criminal Justice Conference on Chem Sex and harmful sexual practices – asked by senior detectives to contribute their influence, community contacts and lived experiences to improve safeguarding, knowledge and understanding.

They have been contributing to organisational learning, helping the Met shape policies and procedures following the horrific murders of four young men by Stephen Port.

Supporting LGBT+ colleagues through the crisis has also been so important to us. Trans colleagues have been unable to access surgeries or appointments and had HRT cancelled. Some living with HIV have been worried about their role on the frontline during the pandemic.

During lockdown we have influenced the police approach on calls to enforce new laws on cruising grounds. Taking a measured, proportionate and evidenced based approach, working alongside other stakeholders has been the way forward. As the Commissioner reminded me recently, ‘Policing is too much for some, and not enough for others’.

When I heard from the Pride in London team that people were calling for us to be removed from the 2021 Pride Parade, against the backdrop of the BLM movement, I was hurt. In the 23 years I have been a cop I have learned not to take things personally. I know how hard so many of our LGBT+ officers, staff and allies have worked. I have seen the difference they make, and how much their involvement energises and gives them strength to make even more difference, which is why the calls to banish them is all the more poignant.

“Pride is a protest”

“Change from within is dead, we are abolitionists now”

“Police are a force of terror”

It is an incredible privilege to lead our Met LGBT+ staff network committee, who in turn provide leadership for the rest of the Met regarding cultural competence for LGBT+ issues.

They are as diverse as London. Over half are black and non-black people of colour. We have every aspect of the LGBT and + represented, along with those with disabilities, with a broad mix of officer and staff, ranks and grades. They have been leading the conversations around intersectionality and the BLM movement, what this means to their loved ones and their role in the Met. They have helped me and others around me understand our privilege and what we need to do together to change. Their voices are heard at the highest levels of our organisation. Their presence – in the Met, at Pride, or anywhere else – will never be an insult.

Police have always had a part to play in protest, usually to facilitate it, keep the peace and prevent criminality. It was also a protest for the first officers who took part in uniform. A protest against discrimination they experienced within their own organisation. Systemic homophobia exists in many institutions and for some this was a show of solidarity, a visible signal of change from within. For some it still is and they deserve their place.

Change from within certainly isn’t dead at Scotland Yard. Nothing could be further from the truth. We are constantly changing, adapting, wanting to be the best. We ask Stonewall to inspect what we do and how we do it. We have an independent advisory group. We have relationships with LGBT+ community groups across London. We have a seat next to the Assistant Commissioner at our Strategic Diversity board. Don’t get me wrong, change in the Met can be immensely slow and frustrating. Show me a public sector organisation of 40,000 people and an annual operating budget of over £3 billion that isn’t.

We are as shocked and appalled as anyone at the death of George Floyd in the US. We want desperately to ensure something as horrifying as his death could never happen here. We are not complacent. From a London perspective, in my view, Police are an overwhelming force against terror. Terror at Pride to be exact. Last year, colleagues from our Counter Terrorism Command arrested and charged two people, one of whom was planning to attack Pride using a firearm, a sword and a van.

ACAB. It is true that a tiny minority very much fit this category. ‘ll bet anyone reading this can insert their own occupation into the C.

So, let me take you back to lockdown.

On the 30th April London was deserted. Only the Police and medics were about on the streets. One of my West End Sergeants, Grieg, came to find me.  He asked if I had chance to join him on some foot patrol. We put on our stab vests and off we went. We stopped at our local supermarket and I brought a bunch of flowers. A lady queuing outside made some assumptions, mumbling something whilst shooting me a dirty look.

We walked up with the flowers to Old Compton Street. We stopped outside the Admiral Duncan, and on behalf of all those people who couldn’t, we lay the flowers at the door – and remembered.

We are by no means a perfect organisation. We make mistakes. We have a long way to go until we don’t need a dedicated LGBT+ Network. But – I have never known a time such as now where I see a genuine willingness across the Met to learn, to grow, to listen and to act.

We have more than earned our right to walk with our community at Pride.

And we each have a right to be proud.

You can read more about Daniel in the Role Model section here.