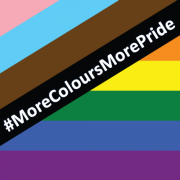 The Rainbow flag is an iconic symbol of Lesbian, Gay, Bisexual, Transgender and Queer (LGBTQ) pride and social movements. The colours reflect the diversity of the LGBTQ community. The flag was the creation of artist and gay activist, Gilbert Baker. Baker was challenged by Harvey Milk to design a symbol of pride for the gay community to replace the Pink Triangle symbol commonly used for the LGBTQ movement. The pink triangle adopted as a symbol of gay rights represented a dark chapter in history and Harvey Milk felt a new symbol was needed to uplift the movement. The original pride flag flew at the San Francisco Gay Freedom Day Parade on 25th June 1978 and had 8 colours but the most common variant used today has 6 stripes; red, orange, yellow, green, blue and violet.

The reimagined ‘progress’ flag, first used in its basic striped version in Philadelphia Pride in 2017, and the more recent flag designed by Daniel Quasar incorporates a black and brown chevron to represent black and minority ethnicity (BAME) people. It also includes the white, blue and pink chevron for transgender people. It has been widely adopted recently due to the international focus on Black Lives Matter protests and vitriol in the UK press about Trans lives fuelled by comments made by J K Rowling.

Why the need to change such an Iconic symbol?

In June 2018 Stonewall revealed that 51% of LGBTQ BAME people reported having experienced racism from within in the LGBTQ community. The pride flag ironically stands for unity and inclusion but yet BAME people feel they have been marginalised, ignored and excluded. Adding colours to the flag won’t eradicate racism and colourism but it does serve to fuel this important conversation. However the change has not been welcomed by all. The change proved controversial and a fierce debate has raged within the community between those who believe the move inclusive, and a great symbolic gesture to the BAME community,  and those who feel it is unnecessary addition to a piece of iconography that already symbolises universal inclusiveness.

Regardless of your opinion on the flag change no one can ignore the need for true inclusivity and an end to the concerning levels of racism and exclusion experienced by BAME LGBTQ people. Racism isn’t just an issue in the LGBTQ community, but we can be at the forefront of challenging it. The inclusion of black and brown stripes on the pride flag has at the very least highlighted that there is a problem and we are determined to change it.

Article | Reflections on the fight that went before.. – PSNI
Scroll to top
We use cookies on this site to give you a better, more personalised experience.
I'm fine with cookies
I'd like to manage the cookies
Manage consent