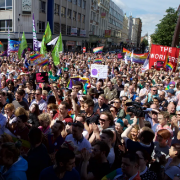 It was 2017 before uniformed PSNI officers walked in the Belfast Pride Parade. There was a wave of community support for this move but also a deeply cynical view from many that stemmed from a historical hurt of police discrimination toward the LGBT+ community.

For the LGBT+ community in Northern Ireland change has been slow, but despite this there has always been a lively Queer culture in Belfast, even if it was hidden from view. Putting both these in context of a complex and somewhat dark history of Belfast Queer life I have reflected on some poignant dates in Northern Irish LGBT+ history.

1970- Gay Liberation Movement in Northern Ireland and UK was developing and demanding direct action for equality.

1974- Cara-Friend was established in Northern Ireland.

1979- The murder of Anthony McCleave. A Belfast Telegraph headline read, ‘Homosexual drowned in own blood’. This disgusting piece of insensitive journalism no doubt compounded the grief of a family who had already faced the tragedy of the sectarian murder of Anthony’s brother, Sammy. Anthony McCleave was a popular porter working in the Belfast City Hospital. On the night of his death Anthony had gone for a drink in the Chariot Rooms, Lower North Street. The Chariot Rooms is fondly remembered by the LGBT+ community as one of the first ‘gay bars’. Shortly after midnight Anthony was found seriously injured in an area close to Chichester Street, a popular cruising area for gay men in Belfast. Anthony was so badly beaten that initial responders thought he had been shot in the head. Despite this the RUC concluded that Anthony was drunk and had fallen. The LGBT+ community were plagued by ‘Queerbashing’ but also gay men in known areas were easy targets during a very dark period in NI history. Most gay men targeted wouldn’t report the assault and robbery because they knew it wouldn’t be investigated or feared they would be the focus of any prosecutions.

1988- Section 28- making it illegal for local authorities to ‘intentionally promote homosexuality’ or ‘promote the teaching in any mainstream school of the acceptability of homosexuality as a pretended family relationship’.

1981- Hugely significant legal case. Dudgeon v United Kingdom, heard in the European Court of Human Rights, created a precedent that homosexuality could not be criminalised in a country which was a signatory to the European Convention on Human Rights. This case was taken by local man, Jeff Dudgeon MBE, an Ulster Unionist councillor, author and historian. He was arrested in the 1970s when his home was raided at dawn. His papers, letters and diaries were seized and authorities were so intent on prosecution that 22 sets of charge papers were prepared for alleged acts which could not be prosecuted for in England/wales and would not have been prosecuted in Scotland.

1982- Homosexuality was decriminalised in Northern Ireland. (Scotland 1980 and England/Wales 1967) This delay of a quarter of a century meant that an entire generation of gay men grew up under the shadow of shame, believing that their love was a criminal act. In Northern Ireland this was largely due to religious and political views. Rev Ian Paisley 1977 campaign, ‘Save Ulster from Sodomy’ received significant following.

1990’s- Belfast was still a difficult place to be openly gay. The first Pride Parade was in 1991 and only 117 participants marched, countered by numerous protesters opposed to gay rights.

1997 – Murder of Darren Bradshaw. Darren was a serving RUC officer and a gay man. He was having a night out at the Parliament bar, a popular gay venue in Belfast the time, when two INLA gunmen entered the bar and shot him three times. Darren died at the scene. Initially the RUC refused to acknowledge him as a Police officer and would not honour him at all. The RUC had never refused to claim one of their officers killed in the troubles until Darren Bradshaw. Officers serving at the time who knew Darren say an internal culture of homophobia was responsible for this. A campaign internally by officers eventually saw a memorial instated at the Police College in Garnerville many years after his death.

1998- Good Friday Agreement which began a process which led to significant advances in the legal rights of LGBT+ people in Northern Ireland.

2002- After an NIHRC report it became illegal to discriminate on the grounds of sexual orientation in Northern Ireland in employment (2003) and goods/services (2007).

2007- A study found Northern Ireland to be the most homophobic western country.

2008- A prominent NI politician and wife of the first Minister told a reporter that gay people were an ‘abomination’ and made her feel ‘sick’.

2018- Historic convictions for abolished homosexual offences in Northern Ireland disregarded and pardoned- available in England and Wales since 2012.

As 2021 LGBT+ history month draws to a close I think it’s important to reflect on our colourful and difficult past. Above is only a snap shot but many of the dates mentioned marked movement in the struggle for equality and they have been made relatively recently, events in the living memory of the LGBT+ community. We should reflect on how far the LGBT+ community in Northern Ireland have come. Reflect on how much we owe to the brave LGBT+ activists who stood up when their lives were at risk for doing so. And also to remember that the fight for equality is not over and we have to be vigilant now more than ever before to protect the rights that were hard won.