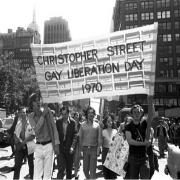 50 years ago today, on 28th June 1970, the first anniversary of the Stonewall movement, many activists and members of the LGBT+ community marked the day by gathering in Sheridan Square, New York City and together they marched up Sixth Avenue to Central Park, the parade stretching for 15 blocks. It is recognised as the first gay pride.

Sergeant Morena Thomas-Wickham is a Police Service Northern Ireland LGBT+ Network Committee member and she says: “I have this black and white photograph mounted on a wall in my house, not as some sort of provocative statement but as a reminder to myself. I did not throw the first brick but I have a part to play and I am indebted to those brave enough to stand up and begin a long fight for equality. Those faces in this picture faced arrest and were jeered and spat at in the street. They faced being fired from their jobs and refused basic rights but they still marched, taking a stand and sparking a global movement into action.”

What is the Stonewall movement?

In the early hours of 28th June 1969, NYPD officers entered The Stonewall Inn, Greenwich Village, NYC. It was to be the third such raid on a gay bar in the area in a matter of days. Gay bars were a place of refuge for LGBT+ to socialise in relative safety in a city where homosexual relations was illegal. Unfortunately, these bars were subject to police harassment. Seen as easy arrests the LGBT+ community were historically passive and offered officers little resistance. This night was different. As the officers cleared the bar, arrested employees and ordered the arrest of anyone not wearing at least three articles of ‘gender-appropriate clothing’, the crowd did not retreat as it had in the past and a riot broke out trapping the officers inside the bar. Police reinforcements assisted the officers and quelled the riot, but over the next five nights, the riots waxed and waned. This was a spontaneous protest against police harassment and social discrimination. Stonewall was a galvanising point in LGBT+ history; the gay rights movement didn’t start that night but it was invigorated by what happened and just as Rosa Parks’ refusal to give up her seat on a bus in Alabama had the effect of animating the civil rights movement 14 years before, Stonewall electrified the push for LGBT+ equality.

So what has The Stonewall Inn and a riot 51 years ago got to do with modern policing?

Beth Wickham-Thomas, Co-Chair of the Police Service NI LGBT+ Network answers: “Stonewall is in the living memory of the LGBT+ community and it was not an isolated incident of oppression, we can see similar incidents across the UK and Ireland. Many LGBT+ people remember these incidents as they lived through them; this has manifested a deep-rooted mistrust in police in a lot of people. The LGBT+ community’s hurt and circumspection have been a barrier to overcome in order to achieve real and purposeful engagement. Despite huge progress over the last few years there remain many barriers to overcome.

“When I was in New York in 2016 it was really important for me to visit the site of the Stonewall uprising. The site has been designated a national monument in the US. It was a moving experience for me to stand on the site where Marsha P Johnston, a black trans woman, pushed back against oppressive police tactics and changed the world. I think being a police officer made it all the more poignant as being an ‘out’ queer police officer would have been unheard of in 1969. It really showed to me how much the world has changed for the better because of Stonewall,” said Constable Paul Bloomer, Co-Chair of the Police Service NI LGBT+ Network.