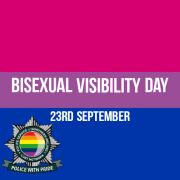 Today is Bi Visibility Day, this is an international day of recognition for the bisexual community. The purpose of the day is to, educate around bi matters and issues and for people of the community, their families and allies to connect, be proud and be visible.

Co-Chair of the PSNI LGBT+ Network, Paul Bloomer, commented on Bi Visibility Day: “I know being Bi myself that all too often the B in LGBT is silent, with bisexual representation being much less visible than those who identify as lesbian or gay.

“Having a fuller understanding of all minority groups within our society and having a workforce which is representative of the communities that we serve, enables us to provide a more understanding, compassionate policing service which all sections of the community can have confidence in. Bi visibility day is one such opportunity for us to learn about the challenges and discrimination that can be faced by others.

“I know that many bi and pansexual people face not only the same stigma the whole LGBT community suffers but also stigma from within the community. Many bisexual people have been on the receiving end of comments which could be seen as intolerant or ignorant. This has led to Bi people choosing to hide their identity or avoid being fully active within the LGBT community. We need to end biphobia and I wish send a clear message to those identifying as bisexual that they are welcome in our Network and in the service as a whole. Being accepted in the workplace is so important as when we can be our true self in work, we are able to work to our full capacity and do our jobs with pride.”

‘C’, a bisexual woman in the PSNI LGBT+ Network wanted to share her perspective.

“As a bi person I found that I didn’t really belong anywhere, I felt like straight people considered me gay and gay people considered me straight. I never talked about my sexuality, but, when I got my first girlfriend as a teenager everyone said (and even argued with me!) that I was gay. It confused me, as it didn’t seem to matter that I had had a boyfriend previously.

I had several long term relationships with both men and women and only ever seemed to be defined, sexuality wise, by the person I was with at that time.

I ended up marrying a man, and since then unfortunately haven’t felt like I “fitted in” to the gay community at all, as if it was a decision to “be straight” and that I’m not bisexual any more.

I think, had there been more awareness around bisexuality when I was younger it would have been a great support for me, as I often felt like I was the “only bi in the village”.

The LGBT+ charity Stonewall research shows that bisexual people are nearly 20% less likely to be out at work than lesbian or gay people.

Statistically you will work with several bisexual people. Some may be out but some will be presenting as either straight or gay.

Within our organisation it is important for all of our colleagues to feel comfortable in the workplace whatever their sexuality.

How can you support bisexual people?

Bi people are less likely to be out. For example 66% of bisexual women are not out to their GP or health professionals compared to 46% of gay women. For men it’s 60% bi and 30% gay (source: Stonewall).

Bisexual – The term bisexual is used to describe someone who is attracted to two or more genders. However it is often used as an umbrella term for other gender and sexual orientation identities.

Pansexual – This describes people who have an attraction to someone regardless of their sex or gender. Those who identify as pansexual are open to relationships with people who do not identify strictly as male or female.

Queer – Another umbrella term used to describe people who are not heterosexual or cisgender. The word queer has historically been used as a homophobic slur however in recent years the LGBT+ community have reclaimed the word and use it as a broader label.

Myth: Bisexuality is just a phase before someone comes out as gay or lesbian.

Myth: You can’t identify as bisexual unless you have been in a relationship with both a man and a woman.

Fact: Sexual orientation is based on who people are attracted to, not their relationship status. Bisexual people are often in stable monogamous relationships and are still bisexual regardless of the gender of their partner.

Campaign | Together by Consortium
Scroll to top