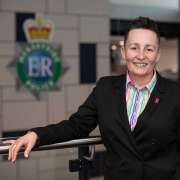 My name is Tracy O’Hara and I am a Detective Sergeant in Merseyside Police.

I am in my 26th year as a Police officer, 21 of those have seen me working within investigations and the majority of my career has been spent covering Liverpool.

You may start reading this and think what does Lesbian visibility week have to do with being in the Police? Why don’t you just get on with your job and stop talking about LGBTQ+ matters? My answer to those questions is this. When I joined Merseyside Police 26 years ago I needed to see other people like me in this job. I needed to know there was a place for me, that I could be me and be a good officer. But I couldn’t. I was different. I was not me and I didn’t perform as well as I could because of who I am and who I loved. There were no role models, there wasn’t any visibility.

I had wanted to be a Detective since I first watched Cagney and Lacey. (google them) and when I became a Police officer it meant everything to me. But to then feel I could not be me. In fact worse than that to be surrounded by homophobia it was not good. I considered leaving the job. 2001, I came to a crossroads. But then, thankfully, a trusted friend told me to stay, they told me to change the police from within, seek out the LGBT+ network and stay.

I did just that.

And once I felt able to be me, my life and my career changed for the better.

The LGBTQ+ network gave me role models, a chance to see others achieving and I knew I could thrive and I did. I remember vividly one of my Detective Inspector talking about her wife and I knew it would all be okay. Thank you Mary

So, I made the decision to be visible, to be a voice for change, to ensure LGBTQ+ voices were heard within the Police service. As a result of being authentic, I started to be a better Police officer and my career went from strength to strength. Because I wasn’t hiding or fretting or looking over my shoulder when I was out anymore.

I have always worked in areas of Policing which I am passionate about. I have always worked in roles where I can support those who need it and bring to justice those who break the law. Once I could be me, once I could be open, once I didn’t have to watch my language, did I say we not I, did I say she, once that was no longer a worry – well, I flourished. And that is why being a Lesbian has something to do with being in the Police. Because I do a better job, I perform better at my role when I can be me within my teams. They know that, I know that. I can join in with conversations, I can encourage questions and we can all learn together.

But being visible goes further than this, especially right here in April 2022. The world is often difficult as an LGBTQ+ person so for Merseyside communities to see me in this role hopefully reassures them that LGBTQ+ people have a place and a voice in their Police service.

I want to be the person, the younger generations see in the Police and know that being Lesbian, (or Bisexual, Queer or Trans) or whoever is not a blocker to doing the job you love. If you cannot see it, do you feel you can actually be it? I am not so sure – and this is why I am visible. Not only for this week, for always.

You can find more information about DS O’Hara in the ‘Our Leaders’ area here.

Blog | The Power of Love – PC Paul Bloomer
Scroll to top
We use cookies on this site to give you a better, more personalised experience.
I'm fine with cookies
I'd like to manage the cookies
Manage consent