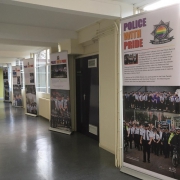 February is LGBT History Month. This is an annual celebration that provides education and insight into the issues the LGBT+ community faces. The aim of LGBT History Month is to primarily educate the wider community about the history of the gay rights movement and to promote an inclusive modern society. As part of the PSNI’s commitment to celebrating equality, diversity and inclusion, the Police College at Garnerville will host a display of pop ups containing samples of the oral histories of those police officers that participated in the service’s first uniformed march in Belfast Pride in 2017.

David Johnston, Police Service NI Diversity and Inclusion lead, said: “I am incredibly proud to have some of this organisation’s contribution to LGBT history recognised by the display in the Police College. This will give visitors and colleagues the opportunity to experience some of what it was like for those officers and staff to be there on that historic day. Our service is fully committed to celebrating the diversity of our officers and staff, irrespective of characteristic, and we will continue to work collaboratively with our minority support networks and other stakeholders to recognise a number of key dates and events throughout the year.”

Co–Chair of the PSNI LGBT+ Network, Beth Wickham-Thomas, said: “LGBT History Month provides us with an opportunity to acknowledge the work of those who came before us while also raising awareness of the work left to do. All too often significant historical figures have been ignored or left out of the history books because they are LGBT. Alan Turing is a notable example as he spent the last few years of his life living isolated from society, with his contributions to computing and the allied war effort ignored for decades, simply because he was gay. Today Alan Turing is remembered and celebrated but it is only through the efforts of campaigners and initiatives like LGBT History Month that this became possible. LGBT history is human history and it is right that events such as LGBT History Month raise awareness of it.”

Constable Paul Bloomer is Co-Chair of the Police service of Northern Ireland LGBT+ Network. He commented: “Sometimes it is forgotten that we are constantly creating history and we need to be mindful of what we are leaving for future generations. When we participated in Belfast Pride in 2017 we realised that we were stepping into the history books. To fully capture the day we had a photographer accompany us throughout in order to create a visual record of the day. After that, we invited those participating in the day to submit their personal stories. We later collaborated with the Ulster Museum to capture the oral history of those that participated. This led to the museum producing pop ups of the photos and a short film with excerpts of the oral history interviews. It is fitting that the display is in the Police College in Garnerville as it will share the space with the memorial for our colleague Darren Bradshaw who was murdered in an LGBT venue in Belfast in 1997.”

Superintendent Norman Haslett, Head of ‘Policing With the Community’ said: “I am delighted that we were able to facilitate this within the police estate. Pride is a great opportunity for police and community engagement. Since our participation in Pride we have noted an improved level of confidence in the police from the LGBT community. This is evidenced by increased levels of hate crime reporting as well as increased applications from the LGBT community during recent recruitment campaigns.”