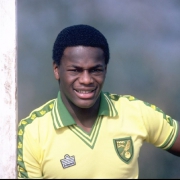 In celebration of LGBT History Month the Network will be profiling a selection of LGBT figures who have played significant roles in shaping modern LGBT culture or had a significant impact on LGBT issues in the public consciousness.

In the first of these, the focus is on Justin Fashanu who was posthumously inducted into the National Football Museum’s Hall of Fame yesterday, Wednesday 19th February, 22 years after his death. Justin is Britain’s first and only ‘out’ gay male professional footballer. Yesterday would have been his 59th birthday.

The famous commentary of Barry Davies, February 1980, when Justin Fashanu scored THAT left footed curler for Norwich, beating England keeper Ray Clemence in the Liverpool goal. The strike sent Carrow Road into raptures and was MOTD’s 1980 goal of the season. Fashanu was ambitious, talented and above all, young. Scoring 34 goals in 90 matches for the Canaries was convincing enough for Brian Clough’s recently crowned two time European champions, Nottingham Forest, to come calling.

In 1981 Fashanu became the country’s first £1m black player (and the first under 21) switching Carrow Road for the City ground of Forest. His potential was soon curtailed, caused in part by his strained relationship with the traditional and direct speaking Brian Clough. Fashanu was openly frequenting gay bars, his sexuality was well known among his fellow players and Clough didn’t approve – important to keep this in the context of early 80s Britain and the backdrop of the arrival of HIV/AIDS and the famous John Hurt voiceover campaign: “There is now a danger that has become a threat to us all…”. Clough eventually barred Fashanu from training with the team.

In 1982 Fashanu went out on loan to Southampton. Fashanu’s transfer value plummeted and his off-pitch life became the focus of the red tops. Fashanu spent much of the rest of his career at a mix of English, Scottish, Swedish and American clubs, never repeating that incredible moment at Carrow Road on the 9th February 1980. In October 1990, Justin Fashanu ‘came out’ as a gay man in an interview with The Sun newspaper, after years of denial and having previously sued for damages when a paper reportedly ‘outed’ him. Fashanu’s relationship with his family was strained; he was now in the shadow of his younger brother, John, who was getting all the right headlines whilst playing for F.C Wimbledon. John paid Justin £100,000 to keep his mouth shut and never spoke to him again. Justin Fashanu was found dead on 2nd May 1998 having taken his own life. A note that he had written said that being gay was just ‘too hard’.