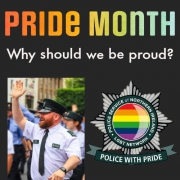 So what exactly is Pride Month?

You may have noticed a lot of businesses and public sector bodies have added rainbow emblems to their logos and social media profiles for the month of June and wondered why.

June is celebrated as Pride month across the world as it was the month that the Stonewall uprising occurred in New York on the 28th June 1969. This led to the birth of the modern struggle for LGBT+ equality. On the first anniversary of the uprising in 1970, Brenda Howard helped organise the first ever Pride march; she’s fondly remembered by the LGBT+ community as the ‘mother of Pride.

The Stonewall uprising was widely seen as the turning point for LGBT+ people becoming more accepted in society and receiving better equality protections. June is also the month when most cities across the world have their LGBT+ Pride festivals.

Pride month is about the LGBT+ community coming together to celebrate our identities in order to empower and support each other. It is also an opportunity to educate the wider community by telling our stories of the joy and empowerment we gain from being able to live our lives as our true authentic selves and also our stories of marginalisation and discrimination which, sadly, many of us still face, in particular bi people, trans people, non-binary people and LGBT+ people from black, Asian and ethnic minority backgrounds.

Why is it called Pride?

The name Pride was suggested by the American LGBT+ rights campaigner L. Craig Schoonmaker before the first Pride march on 28th June 1970. They said: “A lot of people were very repressed, they were conflicted internally, and didn’t know how to come out and be proud. That’s how the movement was most useful, because they thought, ‘Maybe I should be proud’.

For me, Pride is the opposite of shame. Many LGBT+ people have been taught throughout their lives to be ashamed of their identities, this can cause people to have feelings of self-loathing and lead us to live inauthentic, unhealthy, unhappy lives. Showing people that they can be proud of who they are and that they are surrounded by a community of people who love them, support them and affirm them is so powerful and meaningful.

Sounds great, how do I get involved?

A good way to become involved is to join your workplace’s LGBT+ Network, get involved in their pride participation and be a visible ally. Anyone can be an ally and LGBT+ people can be allies to each other, it’s really important that LGB people are allies to our trans and non-binary community members. It’s important to also think about intersectionality in our allyship and going beyond LGBT+ characteristics, by also being allies to women, to Black, Asian and ethnic minority people and all those from minority backgrounds who experience marginalisation.

We all have a responsibility to ensure that we are creating an environment where people feel that they can be their true authentic selves, so that all of us can be happier, more empowered and more confident in our workplaces. You can do this by listening, being open minded, using inclusive language and standing up when you see homophobic, biphobic or transphobic behaviours.

Take a deep breath. That’s ok. There is nothing wrong with you. For a long time society taught us that being LGBT+ was something wrong, dirty, immoral and perverse. We are none of those things, but those messages of intolerance are still pervasive in today’s society, even though we enjoy better acceptance today than generations before us. Many LGBT+ people still hear these messages of intolerance from their friends, family, colleagues and the media. Many of us internalise these messages and convince ourselves that they are true.

They are not true. You are beautiful. You are what you are meant to be. There is a community out there who will affirm and support you. Being LGBT+ is valid and accepted in today’s society and you have nothing to be ashamed of. You cannot change your innate characteristics but you can learn to love yourself and accept yourself.

The only thing you should try to change is to continually strive to be a better version of yourself, educate yourself on the lives of people you don’t understand and work to try to raise up and empower the people around you. If you need support, your LGBT+ Network is there for you too, contact us to get help if you need it. There are also external support services such as The Rainbow Project, Cara-Friend and the LGBT+ switchboard. You are not alone.

Event | Hosting the National LGBT+ Police Conference 2021
Scroll to top
We use cookies on this site to give you a better, more personalised experience.
I'm fine with cookies
I'd like to manage the cookies
Manage consent