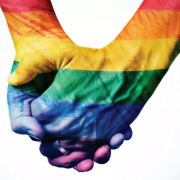 From my school days I remember being taught about the solider Wilfred Owen and the poetry he wrote in the trenches of WW1, I also remember being taught about Alexander the Great and how he established an empire that stretched from modern day Macedonia to Northern India. I was never taught that they had same sex relationships and those relationships were some of the defining aspects of their lives. The wives, husbands and partners of important historical figures have always been included in the recorded history until it comes to LGBT+ people, where they are often conspicuously absent.

For three generations after the war, Alan Turing was deliberately ignored and left out of the historical telling of how the enigma code was cracked, something which was crucial in turning the tide of war against the Nazis. After the war he worked on artificial intelligence, he established the test of an A.I which is still used today, the Turing test. Most people around today know his story thanks to the film ‘The Imitation Game’ but this film and the recognition Alan Turing now receives only came about because of a concerted campaign by LGBT+ activists and educators who lobbied the government to pardon Alan Turing and to address the injustice he had faced, namely the humiliation and pain he had suffered leading up to his death, as well as being left out as a crucial figure of the history of WW2 and computing.

Alan Turing was convicted of Homosexual acts in 1952, the punishment for which was being chemically castrated. This consisted of him being injected with an oestrogen derivative, which caused drastic changes to his mood and body. In 1954 Alan Turing took his own life not able to live with the burden of shame that had been put on him by the society he worked hard to save from fascism. He killed himself with a poisoned apple, some have had said this was an intentional metaphor on his part, as the apple was thought to be the original forbidden fruit.

There is a reason these stories haven’t been taught in schools and this is because there is still a stigma and shame of being LGBT+ in our society.  While it’s easy to think we have all moved on, and some in society collectively pat themselves on the back saying “oh how far we’ve come since then”. It’s still the case that LGBT+ people still live with the legacy of that shame and the adverse mental health effects that it brings.

A study into adverse childhood experience by Dr Vincent Felitti showed that the greater number of extreme negative experiences a child has, the greater the chance they will develop mental health problems in adulthood. The study showed the most damaging experience was “recurrent chronic humiliation”, another way to put this would be to say, ‘being shamed’. Children that experience this dramatically increase the chance they’ll develop self-destructive mental health problems in adulthood. While LGBT+ representation in the media and in wider society has improved, there are still generations of LGBT+ people still alive who didn’t benefit from the more accepting environment that exists today. They grew up feeling ashamed of who and what they were and faced humiliation for that. When faced with this evidence it’s easy to see how LGBT+ people are disproportionately affected by mental health issues.

The writer Matthew Todd said this in a 2018 Guardian article,

“Gay people are not the only ones to suffer such shame, but experts, both gay and straight, agree that gay kids are overwhelmed with it. Many of us grow up, come out and have wonderful and happy lives. For others, the journey can be rockier. Many bury their feelings, hoping they’ll go away, some psychologically “split”, like the heterosexually married men who believe anonymous internet hook-ups don’t count as gay if they happen in secret.”

The legacy of shame can be apparent in the community, a lot of LGBT+ people have the shared experience about the homophobic bully in school who pops up on gay dating sites or in the in a gay bar years after they tormented the ‘queer kid’ in school. A lot of LGBT+ people know a community member who is very vocal about their distaste for LGBT+ pride events, can’t abide butch women/effeminate men, states how they, “aren’t like other gays” and will undertake actions to disempower and undermine other LGBT+ people around them. Behaviours like these can be indicators of internalised homophobia and that the person concerned in some way has a deep rooted shame of their sexuality or gender identity. This self-resentment and internalised homophobia/transphobia can have deleterious effects on a person’s self-esteem, self-worth and mental health. When I see LGBT+ people speak out against equality for their own community I can’t help but think this is a reflection of their own internalised self-hatred. We must show fellowship and support those who struggle with their own shame and not judge them or alienate them but help them see how their behaviours are hurtful to themselves and the wider LGBT+ community.

David Copeland who bombed the Admiral Duncan gay bar in 1999, feared he was gay and violently acted out against the LGBT+ community in London. The most deadly homophobic attack in recent history, the Pulse nightclub shooting in Orlando, Florida in 2016 which killed 49 people and wounded 53 others was perpetrated by Omar Mateen. It was widely reported that Mateen, used gay dating apps and met dozens of men for sex in the years leading up to the attack, his ex-wife also believed he was gay. The list of politicians and religious leaders who espouse homophobia and transphobia, who later end up being exposed as having ‘closeted’ affairs with same sex people is seemingly endless.

Of course these are extreme examples, not everyone dealing with the shame of being LGBT+, commits acts of terrorism or promotes hatred, in his book ‘Straight Jacket’ the author Matthew Todd talks about other ways this shame manifests. In the same 2018 Guardian Newspaper article he said,

“Talking about gay shame and self-loathing is not easy. It flies in the face of the message of gay pride that has dominated the gay rights movement of the last 50 years. But we must talk about it. Most people wrestling with shame hurt themselves. Disproportionate numbers of LGBT+ people suffer with self-destructive behaviour. At the end of 2016 we lost George Michael after years of mental health and addiction struggles. A year later, 21-year-old American rapper Lil Peep died from a fentanyl overdose months after he came out as bisexual. The 38-year-old presenter of the Discovery Channel’s Storm Chaser programme, Joel Taylor, died from a GHB overdose on an Atlantis gay cruise. All in a year that saw the usual reports of unsupported LGBT+ teenagers killing themselves, such as a 15-year-old in Stirling, after years of bullying, and a 16-year-old girl whose life-support machine was turned off after doing the same. And so it goes on and on, without much awareness or enough being done to address the situation. It may not fit the narrative we wish to promote but there are huge numbers of people getting themselves into serious situations without enough support. Mental health isn’t “nice” or glamorous or about clinking champagne glasses at fancy events, it’s often about self-hatred, substance abuse, sex and people engaging in extreme behaviour, which many find hard to be sympathetic towards, but that is where the work lies.”

I feel that we LGBT+ people and wider society need to show more compassion for those who struggle with their shame about being LGBT+ and help them have Pride in themselves. We must also educate all young people of the positive contributions LGBT+ people have made to history so that future generations do not have to deal with shame as we do. Many in our community are stuck in a cycle of shame, poor mental health and self-destructive behaviours at the moment and it’s causing serious harm, it’s time to break that cycle. We can do that with compassion, education and continuing the effort to dismantle of the shame of being LGBT+ in our society, allowing all of us to have Pride in ourselves and our identities.

If you need help or support with any of the topics mentioned please see the support services listed below for help and information:

Blog | Policing and LGBT+ History Month 2021 – DCC Julie Cooke
Scroll to top
We use cookies on this site to give you a better, more personalised experience.
I'm fine with cookies
I'd like to manage the cookies
Manage consent