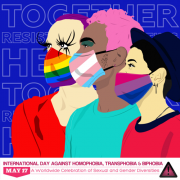 IDAHoBiT is marked each year allowing individuals and groups to stand together with LGBT+ people against discrimination and abuse. IDAHoBiT started in 2004 to draw attention to LGBT+ equality issues and to highlight progress being made throughout the world. The day was designated due to the 1990 World Health Organisation’s decision to declassify homosexuality as a mental disorder…that is right…1990!

IDAHoBiT 2021 theme is – Together, Resisting, Supporting, Healing! In the context of the last year and a bit, I think we all need and want to be together in some way. I recently wrote to all Chief Constables asking them to support their staff during Pride Season – to attend parades or events, knowing that this is so important for the wellbeing of LGBT+ people. We absolutely need to support each other and I am a firm believer that at some point, we all need some form of support. And when it comes to healing….a decision was made 31 years ago to declassify being gay as a mental disorder; I find myself talking about this and often question the date – like I do each time I say out loud that it was in 2014 that the first same-sex marriage occurred in the U.K!

So, this year when I think of IDAHoBiT, I consider how many people there are who suffer some form of LGBT+ abuse but they don’t have the confidence to tell anyone about it, seek support or report it to the police. It then makes me think of role models – are there enough people out there who you recognise as being like yourself and help to build that confidence for you?

On many occasions I’ve heard it said that “You can’t be what you can’t see”. This was headlined in an article about how to get more women in Tech businesses, the premise being that to get women into tech, you need to show women in leading roles in tech companies…anyhow…it caught my eye. The quote has also been attributed to civil rights activists and others. The great thing about quotes is that they can mean different things to different people and for me I relate it to Role Models. How can you succeed in Policing if you do not see successful colleagues that look like you or stand for the same things as you?

There has been much work in UK Policing over the years to increase the diversity of our people -especially BAME and LGBT+. This goes back to the founding Peelian principles of Policing in England and Wales that “the police are the public and the public are the police”.

I was delighted earlier this year to Tweet my support for CC Adrian Hanstock, the first gay man to be the Chief Constable of a British Police force. This is to be celebrated, but at the same time we could ask, why did it take so long? We will never be able to wholly answer the question definitively, but here are my thoughts……

Adrian is quoted in an article explaining that British Policing a few years ago was not the most willing to embrace difference. Views on homosexuality were often hostile and suspicious. Adrian’s story is not dissimilar to many I have heard, from officers and staff of various backgrounds. Time and time again I have heard that people could not be themselves and tried to hide their true self, in fear of discrimination or abuse. This was not just in Policing, but if we are honest, it was reflective of the general societal view; or at least how general societal opinion was voiced at the time (in the 1980’s).

At that time there were few LGBT+ role models for people in Policing; and for people to feel comfortable in their job and to excel in their profession, it must have been very difficult. So, I am proud to say that this year we have published our LGBT+ role models in policing booklet. There are 34 role models across a great diversity of LGBT+ identities, all of whom have a part in policing. I believe it will enable LGBT+ people, internally and externally, to recognise people like themselves and have confidence to be themselves or indeed confidence to report if they are a victim of homophobic, biphobic or transphobic hate.

I remain determined in resisting the often ignorant calls of “why do we still need rainbows, why do we need a lanyard, why do we need Pride” – I would love to respond by simply saying “see above”. But whether you are a LGBT+, an ally, a family member, friend or colleague – if you just stop and think about the fact that it was only 7 years ago, that 2 men or 2 women were able to get married, then that is the reason we still need to wave rainbow flags! That colleagues of mine tell me they risk-assess public displays of affection or whether it is safe to hold hands, something easily taken for granted by so many. There are many issues that still need addressing and as National Police Chiefs’ Council LGBT+ portfolio lead, I hear the continued calls for parity for all communities and people. It is only when someone is accepted, respected and allowed to live their life as who they are, that they can begin to heal.

In policing it is our aim to be as representative of our communities as we can be. This will assist in educating all our staff to recognise all forms of hate, specifically homophobic, biphobic or transphobic hate, encourage people to report and then deal with it as well as possible.

For my sign off today, I would just like say – be kind, be polite and be a role model, you just never know who is watching you and the impact you can have on someone’s life. 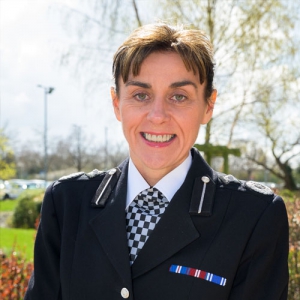 You can find more information about DCC Cooke in the NPCC Portfolio area here.