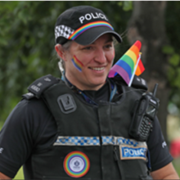 I am in the final few months of my full time role as General Secretary of the Scottish LGBTI Police Association, a full time role within Police Scotland. I have been a police officer for just over 15 years, starting my policing career in West Yorkshire Police and very much in the closet. It was challenging to hide who I was, and without a doubt played a part in feelings of isolation and difficulties in the start of my policing career.

In 2012 I transferred from Leeds to West Lothian, Scotland. Moving from a large multi-cultural city to an economically depressed old mining town, this was a shock to the system to say the least. It also presented an opportunity for me to be my authentic self. From then on, I was, for the most part “out” at work.

It wasn’t until 2018 that I had any involvement with the then Gay Police Association, where after I was nominated by a colleague (and not present at the vote) I was elected “The Women’s Rep”. This was in no small part because, the GPA didn’t have any female representation. At all. I went to a couple of committee meetings but didn’t really have any idea what was going on.

In 2019 through a mixture of lack of alternatives, my current position and timing, I took on the General Secretary role. It was never in my plan of things to do, or career aspirations, so much so, initially I turned down the role. It wasn’t “policing” and what on earth did I know about running a Diversity Staff Association? It wasn’t that long ago I was issuing tickets to drunk people in Bathgate for peeing in the street…

I clearly remember being sat in meetings with very senior officers, not a clue what any of them were talking about, no idea how to write a suitable Briefing Paper and a total sense of horror at the mammoth task ahead of me. Where to even start?

With the exception of 2 people the entire exec committee had quit. I felt a massive sense of responsibility to make things better, if I could, bit by bit and one day at a time. It was often a thankless task and felt not dissimilar, to hitting my head off a brick wall. Frequently. This role has without doubt been the steepest learning curve I have ever had, testing me in ways I never thought possible.

Upon reflection, there have been many successes over the past two and a bit years, although not always apparent at the time. The Association now has a full committee, divisional reps in nearly every geographical division in Scotland; an increase of almost 700% in membership. The introduction of Gender Neutral Hats in Police Scotland, is probably the most visible change, and something we worked on for a long time. Other less visible but perhaps more impactful developments have included the launching of the UK policing’s first LGBT+ reverse mentoring scheme, and putting on a series of events, activities and conferences.

The most important measure of success however has been the legacy. The team that has been built, the stories that have been heard, and the positive changes that have taken place. The Association has gone from strength to strength and I fully expect this to continue under the new General Secretary. Diversity Staff Associations/Networks are an often under-appreciated and under-utilised resource within Policing, if you are reading this and have a network within your force area why not reach out and get in touch? You might be surprised at what you can get involved in and what positive change you can effect in your force. Thank you to everyone who has been part of this journey.

Blog | LGBT History Month 2022 – DCC Vanessa Jardine
Scroll to top
We use cookies on this site to give you a better, more personalised experience.
I'm fine with cookies
I'd like to manage the cookies
Manage consent