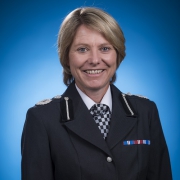 If you had told me 27 years ago when I joined the police that one day I would be writing about being gay, I would have recoiled in horror.

I was always a tomboy, one of my earliest memories is playing football with my best friend, me in my beloved Manchester City kit and Brian in his Manchester United kit. If we weren’t playing football we were racing around on our bikes. At that time in primary school I was every bit as good as the boys and wanted to play on the boys football team, (nothing like a girls team existed then). I realised how separate the sexes were when my teacher said I could only continue to play football if I played netball for her team. Well netball was rubbish in my eyes, what kind of game was it where when you get the ball you had to stand still? I then went to an all girls school which took me away from football and this was not easy at all.

I always knew I was different to many of my friends but didn’t know what to do to be my true self. There was little on television at that time, no internet to research and I felt very alone for a long time. Throughout university I didn’t let myself ‘go’ and struggled to be myself which meant I was unhappy for a lot of the time. I did eventually meet someone during a summer job who I talked to about the way I felt and we started to go out into the gay village in Manchester, but I was painfully shy.

When I started in the police I met someone and started a relationship. I now recognise that it was extremely cruel when this person said that we could not continue seeing each other unless I came out to my parents. It’s strange what you will do sometimes but I did what she asked. I can remember the occasion like it was yesterday, my mum was pegging the washing out when I told her. The first thing she said was ‘is it something that me and your dad have done’. Fast forward and my parents have been the most supportive understanding people you could ever wish for. It wasn’t something they expected as they had never known any gay people. Now they come to Pride to support me marching in uniform, love all my friends and couldn’t be prouder.

I spent a long time being so far in the closet I was practically out of the other side. I would look longingly at people in the police who were out and could be themselves. Now all that has changed, I try every single day to make the police service as inclusive a place that it can possibly be. Everyone should be able to be their true selves at work. They deserve to be relaxed, happy and feel confident being themselves. People need to be kind, not judge and recognise that people love in different ways. It can feel like I have to ‘come out’ nearly every day in one way or another and that can be exhausting. It’s very important though that those of us that do feel we can be out, that we make every day a day where someone else can be their true selves. People deserve to be happy and together we can make a difference.

You can find more information about DCC Jardine in the NPCC Portfolio area here.

Blog | The moment it all changed for me – PC Paul Bloomer
Scroll to top
We use cookies on this site to give you a better, more personalised experience.
I'm fine with cookies
I'd like to manage the cookies
Manage consent