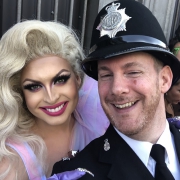 My career in Cumbria police started in 1997 as a crime inputter before joining as a police officer in 1999 (seems a lifetime ago). I’d been surrounded by the police environment all of my life with my dad having been a police officer and I was lucky to work with him for the last 2 years of his policing career.

A couple of weeks before I went for my police interview I was on a night out with some friends in a local nightclub when two lads who I knew from secondary school approached me, they continued with their hate insults which I had been subjected to throughout school and started to assault me, resulting in me having a dislocated jaw. As I left in an ambulance to go to the hospital I saw my dad and his shift running to what I later found out was a report of a male being assaulted, ME. a couple of weeks later I went off to police headquarters for my weekend assessment centre, my confidence had been destroyed and I was asked to go back and try again.  All I could think about was how two individuals had ruined my chance of a career in the police because of their hate for someone who was gay. The thing was, I wasn’t open about my sexuality back then so they didn’t know anything but had made assumptions. I went back to another assessment centre and was offered a job as a police officer.

The start to my career wasn’t the best and when I look back I can see how the canteen culture and microaggressions against the LGBT+ community were there, it was like my school days.  I did think about leaving the police to stop people talking about me and questioning my sexuality but that little voice was saying to me “Tys, be yourself”, I told a close work colleague and lifelong friend that I was gay and it went from there.

23 years later in my career and  I’m now the Chair of the Cumbria Police Pride Network, it gives me so much personal satisfaction and pride in being the person who supports their colleagues, representing the force as someone who stands up and is proud to talk about being gay in the police.  People still ask “why do you need to keep going on about it, everyone is equal aren’t they”, my response is, if we don’t talk about things, if we don’t recognise what has previously taken place, good and bad, then the underrepresented could be at risk of being silenced and forgotten.

Being able to be your authentic self, both in the workplace and in home life makes that person happy, safe and valued. I hope anyone reading this can see that we all have our different journeys in life, I hope others don’t have to experience the verbal abuse and the violent assaults like I did,  all because someone takes it upon themselves to show their hatred and in a lot of cases, lack of understanding.  This is why I do what I do, to make sure that person is heard and the community is safe. I have been lucky to have met some amazing people, some of you will have already read their blogs,  they are inspirational and kind people.

I guess what I could have said in a few words is, be kind, be yourself and remember we are always here for you.

Blog | LGBT History Month 2022 – PC Al Smith
Scroll to top
We use cookies on this site to give you a better, more personalised experience.
I'm fine with cookies
I'd like to manage the cookies
Manage consent