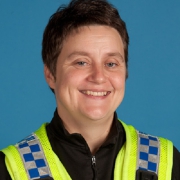 This is the first blog I’ve shared about me. As usual I wasn’t going to take part, but then I felt inspired by others on our national team to do so. Bizarrely I actually feel quite nervous doing this.

From a very young age I knew I was different, I preferred the company and activities of boys, I couldn’t really identify with other girls and their interests. I preferred to wear trousers and jeans and resented being made to wear skirts, or look girly. I wanted to be who I really was and express myself in a way in which I felt truly comfortable with. This mindset has never changed over the years and remains a core part of my identity.

I became aware that I had same sex attraction in my early teens and started to become interested in other girls. I had an older gay brother, 5 years my senior, so being around LGBT+ people when I was growing up was pretty much the norm. That exposure and support from people of difference helped me to become and realise the person I am today. I wouldn’t say it was a foregone conclusion, I did try a couple of relationships with men, both of whom I still remain in contact with today, but following on from this I knew for sure this wasn’t who I really was, and that’s okay.

I am a 70’s baby, so growing up and schooling took place during the 1980’s. This was a very trying era, particularly for LGBT+ youth, the discrimination of that time was beyond terrible. Everywhere you looked there was homophobia and wider discrimination. Limited rights and lack of equality on many different fronts, politicians and religious leaders declaring that we were not to be seen as normal, discussed or promoted in any way. Regrettably the police played a hand in this also, not part of the Peelian Principles, or policing by consent model we know now – we must own this! Generally it was an ugly, depressing time to grow up in and our gay men often took the greatest hit. Section 28 came into law during my late secondary school years. This caused huge damage to many young people, however that discrimination caused a fire in me which has been burning ever since. I simply won’t put up with this type of nonsense, I’m very much like Teflon to it and I really have seen and heard it all before, on repeat. We simply won’t be erased, we belong too!

Contrary to popular perception [Inserts Laughter] I’ve only had a few relationships with women, I’m generally very outgoing, but when it came to women I was rather nervous and unsure of myself. Sadly two out of three of those relationships were an absolute disaster and I was ‘cheated’ on, or lied to. This left me feeling undeserving of finding anyone remotely decent and knocked my confidence significantly. I resorted to throwing all my energy into work and my beloved dog as a trusted companion, at one stage distancing myself from any relationships for almost a decade!

This was the only time in my life I wished I wasn’t gay and that I could change it. Good news, I did eventually find my soul mate and we have been happily together for ten years. We share our own home in a beautiful part of the south west and we are bringing up our ‘fur daughter’ (a re-homed miniature schnauzer) who’s completely adorable and crazy.

Career-wise I’m now in my 16th year of policing. I was open about my sexuality from the very moment I joined. I remain unsure to this day whether or not that was initially a good thing, but then I could never be someone that I’m not. I have always championed LGBT+ equality in various organisations and took an active role in staff support associations. I am the chair of our internal LGBT+ Network (supported by a sergeant and PCSO as vice chairs) and I’m also the deputy chair of our regional LGBT+ Network, it keeps me busy and grounded. I currently work as a Hate Crime coordinator in my constabulary, I literally live, sleep and breathe what I do.

Being ‘out’ and championing these issues can really take its toll and can become quite tiring, particularly when you’re up against cynicism, criticism and toxicity, almost as though you’re making a fuss over nothing and looking for preferential treatment. [See social media for examples]. This of course is not the case and most people tend to champion this work with lived/ally experience and a genuine desire to improve the lives of others.

A part of me wishes I could just carry on and not have to keep talking about my sexual orientation at work, realistically we should already be there, but if we stop, I tend to see LGBT+ inclusion going backwards. I simply cannot allow that to happen, for the most obvious of reasons. I feel inspired every single day by my national colleagues, there is a real bravery in being ‘out’, not everyone agrees with our identities and the way in which we promote inclusion. We have some wonderful people who really do go the extra mile to ensure policing is as representative and supportive of LGBT+ people as it can be, I make up a very small part of this much larger effort.

I know and fully understand the importance of seeing visible LGBT+ role models in society and within policing, that’s why I do it. Every single day I work hard and strive to be the person I wish I had to turn to when I first joined the police. I offer a genuine, supportive hand of friendship to those who struggle to be themselves, want support over a wide range of different issues, and endeavour to lead/advise my organisation in the right way when it comes to LGBT+ , and/or other equality matters. This in turn should hopefully improve our service to the public. Let’s face it, if we can’t look after each other, what hope have we got to even begin to look after wider society and keep them safe from harm.

My sincere wish is that I am making a difference to people. I am so very proud to serve the public, but even prouder to serve them as an openly gay female police officer.

Blog | LGBT History Month 2022 – PC Adrian Tyson
Scroll to top
We use cookies on this site to give you a better, more personalised experience.
I'm fine with cookies
I'd like to manage the cookies
Manage consent