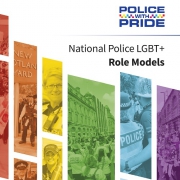 Co-Chair of the National LGBT+ Police Network PC Amy Tapping explains,  “I have seen the importance of visible role models in helping others be able to bring their whole selves to work, this means those previously having hid half their life can now put all their energies into being a good police officer while they are in the workplace. This is good for the individual officer, good for the organisation and good for the victims of crime that depend on Police support. We hope this role models booklet will help to ensure our LGBT+ policing colleagues feel valued and confident to be themselves both in and out of work.”

Co-Chair of the National LGBT+ Police Network Chief Superintendent Clinton Blackburn added, “Having joined policing in an era when there were no visible LGBT+ role models it really inspired me to use my own experience to help others. Role models are incredibly important as they allow others to see that they can be themselves in policing and succeed in the workplace while doing so. We have come a long way over the last 10 years and we have further to go, having visible role models will help ensure that journey continues and we start to see policing reflect our diverse communities”.

NPCC lead for LGBT+ Deputy Chief Constable Julie Cooke said, “I am a proud ally for my LGBT+ Police colleagues.  With the launch of this new LGBT+ role models booklet – we show the great diversity of people in policing who can be role models and advocates for others. This demonstrates that we are working towards much more representative and inclusive policing organisations. This is vital as it shows communities they are represented within the Police, this is a key Peelian principle, we are the public and the public are the Police.”

The role models booklet along with a letter from DCC Cooke addressed to Chief Constable’s will be circulated digitally around UK Police services for internal distribution. The booklet will be a living document which will be updated in time.

The role models booklet can also be found in The Workforce Resources section here.

Profile | Will Ambler | Transgender Day of Visibility
Scroll to top
We use cookies on this site to give you a better, more personalised experience.
I'm fine with cookies
I'd like to manage the cookies
Manage consent