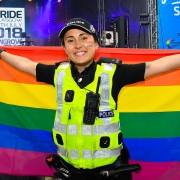 As a child I absolutely loved sports. I grew up skateboarding and playing football with the boys. So it was a real shame I missed out on so much PE in high school. While the boys played rugby or football outdoors, I spent some PE lessons alone in the changing rooms. Back in the early 2000s it was commonplace for high schools in Scotland to have strictly gendered PE classes. The girls were expected to dance and dancing made me feel incredibly uncomfortable. It still does! It felt like such an injustice. I was 13, and I was being denied doing activities I enjoyed purely because of my gender.

I felt a similar feeling of injustice and confusion when I joined Strathclyde Police as a Special Constable in 2010. I distinctly remember being issued my uniform in a large games hall with the rest of my mostly male cohort. I couldn’t understand why the women were issued cravats and bowler style hats and the men were issued ties and peaked cap style hats. Why, I thought, did the organisation not get rid of the bowler hats and cravats back in the 70s when the skirts, handbags and smaller batons were deemed sexist? It felt repressive. It didn’t cross my mind at that time that there might have been someone in the room who didn’t identify as exclusively male or female. It wouldn’t be until much later in my career I’d recognise the implications of gendered headwear for my non-binary colleagues.

I joined the regular constabulary in 2011 and as I progressed through my first few years, I began to feel increasingly uncomfortable wearing my bowler hat. To me, it reinforced gender stereotypes, made an unnecessary distinction between male and female officers and most significantly, presented a real problem for my non-binary colleagues. I belonged to an organisation committed to positive action and inclusivity yet the unavailability of a gender neutral hat did not align with its values of fairness, integrity and respect.

It wasn’t until 2017 I finally acquired a police baseball cap. At the time it was only worn by public order, firearms and a small number of other specialist officers regardless of their gender. I started to wear it routinely on shift instead of my bowler hat which I promised myself I’d never wear again in support of my non-binary colleagues. I was challenged several times by supervisors as at that time the baseball cap wasn’t compliant with the uniform standards of a response officer. I viewed every confrontation as an opportunity to explain the detrimental impact the current uniform policy was having on some of my colleagues.

In 2018 I took my concerns to the Scottish LGBTI Police Association. I felt heard, validated and empowered to be involved in making a change. I had been a member of the Association since I joined the police but had never been actively involved. It was at this point I decided to join the committee and take on the role of Welfare & Wellbeing rep.

The Scottish LGBTI Police Association, in acknowledgement that gendered headwear directly affected some of its members, worked tirelessly for change at every available opportunity.

On the 28th of August 2019 Police Scotland published a memo granting permission for all officers to wear gender neutral headwear (in the form of the police baseball cap) should they wish to do so. Although an interim solution, I felt delighted and relieved by the news. This was one of the biggest changes to uniform policy in many years. The Scottish LGBTI Police Association are now focusing efforts on the move to one single, gender neutral style of hat for all.

This experience taught me the importance of being persistent, the influence of staff associations and the power in always standing up for what you believe in. I now feel very comfortable in my uniform in the knowledge that Police Scotland understands and respects the importance of gender identity and expression for LGBT+ staff.

“If you are neutral in situations of injustice you have chosen the side of the oppressor.”

Blog | Introduction of Network Co-Chair – Chief Inspector Lee Broadst...
Scroll to top
We use cookies on this site to give you a better, more personalised experience.
I'm fine with cookies
I'd like to manage the cookies
Manage consent