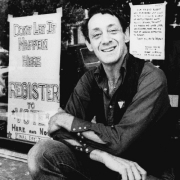 In celebration of LGBT History Month the Network will be profiling a selection of LGBT figures who have played significant roles in shaping modern LGBT culture or had a significant impact on LGBT issues in the public consciousness.

Today we remember Harvey Milk. He was a leading civil and human rights leader who became the first openly gay official in the United States when he was elected to a seat on the San Francisco Board of Supervisors in 1977, taking his place on the Board of Supervisors on January 8th, 1978. Milk openly campaigned as a gay candidate at a time when the LGBT community both in the United States and across the world was experiencing widespread hostility and discrimination.

Harvey Milk was born in Woodrow, New York on May 22nd 1930 to Lithuanian born Jewish parents. He attended high school and college in New York City, before enlisting in the United States Navy, attending Officer Candidate School in Newport, Rhode Island. His career in the Navy was cut short after he was officially questioned regarding his sexuality and he resigned in 1955.

Following his time in the Navy, Milk spent time working in New York City. It was in New York that he first became involved in politics and advocacy, demonstrating against the Vietnam War.

In late 1972, Milk moved to San Francisco, where he opened a camera store on Castro Street, in the heart of the city’s growing gay community. Milk quickly became a popular figure in the Castro neighbourhood and the city as a whole. His first political campaign was a year after he moved to the city and despite losing that campaign, Milk became a force to be reckoned with in local politics. It would take Harvey two more campaigns before he was elected to San Francisco’s board of supervisors .He was elected in 1977 and was inaugurated as a San Francisco City County supervisor on January 9th 1978.

Although Milk was openly gay and was an advocate for the Castro neighbourhood, he was popular as a supervisor due to his commitment to serving a broad constituency. Milk established day care centres for working mothers and sponsored an important anti-discrimination bill in his short time as a San Francisco city official. He was also very vocal in his support of women’s rights and the rights of racial and ethnic minorities.

Milk was aware of the likelihood that he may be assassinated – he received daily death threats and even recorded several versions of his will to be read “in the event of his assassination.” Harvey Milk was assassinated by Dan White, a former colleague on the San Francisco Board of Supervisors on November 27th 1978.  White’s attorney later claimed that his client had consumed too much junk food on the day of the killings (in what became known as the “Twinkie defence”) and only received a sentence of eight years in prison on May 21st 1979. This enraged many within the LGBT community in San Francisco, igniting what came to be known as the White Night Riots.

Constable Belinda Dodsworth says: “Harvey Milk is a man I admire for his tireless work for the advancement of LGBT and broader human rights at a time when it was incredibly hard to be openly gay in public office. I have long identified with certain aspects of his life being an LGBT person from a Jewish background; but Harvey’s tireless commitment to LGBT and human rights was something that one from any cultural/religious background or sexual orientation can identify.”

The life and career of Harvey Milk was portrayed in the 2008 film “Milk”, starring Sean Penn.