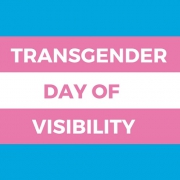 Today is transgender day of visibility, or TDoV for short.

It is a day when trans folk, the LGBT+ community and allies celebrate the lives of trans, non-binary and intersex people. A day to honour trans people, to embrace diversity and to raise awareness of the challenges trans, non-binary and intersex people still face as well as celebrating the contributions of trans people to society. The day was founded by US-based transgender activist Rachel Crandall, citing the frustration that the only well-known transgender-centered day was the Transgender Day of Remembrance which mourned the murders of transgender people but did not acknowledge and celebrate living members of the transgender community. The first International Transgender Day of Visibility was held on 31st March 2009.

The trans pride flag is flown by many organisations across the country to celebrate the day. The flag represents the transgender community and consists of five horizontal stripes: two light blue, two pinks, and one white in the centre. The designer of the flag, Monica Helms, explained the design as such: “The stripes at the top and bottom are light blue, for baby boys. The stripes next to them are pink, the traditional colour for baby girls. The stripe in the middle is white, for those who are transitioning or consider themselves having a neutral or undefined gender.”

Sergeant Morena Wickham-Thomas of the Police Service NI LGBT+ Network committee said: “Research indicates that 51% of trans people have hidden their identity at work for fear of discrimination. The ignorance and misconceptions around the trans and non-binary community is perpetuated by media sensationalism and this manifests itself in an unwelcoming workplace. This is why, as allies, we must do better. I must do better. As a supervisor I would be embarrassed if I found out that one of my team was frightened to be themselves at work. We all have a responsibility to make our work environments supportive, safe spaces for a diverse workforce.”

Constable Paul Bloomer, Co-Chair of the Police Service NI LGBT+ Network said: “In these challenging times of isolation and social distance which are necessary to fight the pandemic we face, we must remember those whose isolation is compounded due to them being trans and not being able to be themselves at work. It is more vital than ever that trans people and trans allies remain visible and connected.”

Article | Lesbian Visibility Day 2020 – PS Northern Ireland
Scroll to top
We use cookies on this site to give you a better, more personalised experience.
I'm fine with cookies
I'd like to manage the cookies
Manage consent