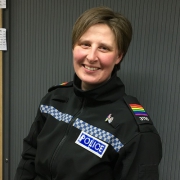 At school I knew I wasn’t like the others; I didn’t want a boyfriend, I loved playing sports and climbing trees, I was awesome on a bucking bronco! My mother getting me to wear a dress always resulted in an argument and me sulking for the day – it didn’t stop me riding the bucking bronco either.

I hated having to wear a skirt to school, I also knew that if I said I liked girls it would have resulted in bullying and a much more unpleasant time for me. Going to college I remember there being an LGBT+ awareness event, but I was worried that if I was seen there people would say stuff so I just popped my head in for 5 minutes just so I could see what it was like; at that point the female speaker was being challenged for wearing a tie so I decided it was best for me to leave.

University gave me the opportunity to be myself, I naturally became part of the group that identified as LGBT+, suddenly I felt I’d found my people. I could be me without worrying. My confidence in myself grew in all aspects. Although having just found girls the academic part of my life didn’t go so well.

The impact of the rainbow flag, however small, became really important to me. It meant the pub or club I went to was a safe space. I could hold the hand of my girlfriend without fear or feeling uncomfortable. All the toilets were effectively gender neutral – no one cared and as usual there was always a queue at the ladies. When one of the pubs I went to brought in gender neutral toilets (20 years ago) it wasn’t a big thing, people just went to the loo.

On joining the police I chose not to talk about my partner when I went to my first posting, but I soon realised no one really cared. I joined the LGBT+ Network in Thames Valley Police but never really got involved. On transferring to Northumbria Police to live with my girlfriend, I put my name forward to be part of the LGBT+ Network, but it soon closed down as it wasn’t seen as necessary.

I was asked to assist with Northumbria’s participation at Northern Pride. This led me to feel there was a need for a staff support association and network especially after attending a National LGBT+ Police meeting which encouraged a need for a local LGBT+ police network. I formed a small committee, the first year there were only four of us. I was Chair and moved on to have a Co-chair of different gender identity. The Network has grown and supported the founding of other staff associations within the organisation.

I moved on to the Regional Representative position, attending the quarterly National Network meetings and at the end of my predecessors term as Co-Chair, I put myself forward and was elected National Co-Chair. I had always been passionate that policing does not support LGBT+ victims of domestic violence adequately and having been banging this drum for a while, with the support of an Australian colleague who had also felt the same, I launched LGBT+ Domestic Abuse Awareness Day on 28th May 2021 in the UK.

I was recently a finalist as positive LGBT+ Role Model in the National Diversity Awards, it was an amazing evening meeting so many fantastic people. The event invigorated and inspired me as I have so much more I want to achieve to make a difference for LGBT+ staff, officers and victims of crime. I’ll start with gender neutral toilets!

You can find more information about PC Tapping in the ‘Our Leaders’ area here.

Blog | LGBT History Month 2022 – PC Steph Lawrence
Scroll to top
We use cookies on this site to give you a better, more personalised experience.
I'm fine with cookies
I'd like to manage the cookies
Manage consent